My Wall of Peace

I learned about Sister Norma Pimentel today.  She is a recipient of the 2018 Laetare Medal; a prestigious award she received in recognition of her efforts to advocate for migrants and refugees she has encountered in her work near the United States-Mexico border.  She was in the news today as she joined a number of activists who are trying to tell the world about the traumatic experiences of children who have been separated from their parents by officials at the border. Those who know her as describe her a “bridge among walls.”

Because this is an important justice issue; and because her efforts are so important – I decided to share her story with my students.  I added her name to my classroom wall. She joins approximately 1600 other amazing people who have promoted peace and justice through their lived experiences.

At a professional development day I attended a few years back, our keynote speaker, Marc Kielburger, was asked what we could do to work to promote peace and justice in our classrooms.  He suggested that one first step was to celebrate peacemakers.

I decided to do just that.  I began putting names on my classroom wall at St. Michael Catholic Secondary School in Stratford where I teach religious studies.  Each day I told a story about someone who was committed to peace, social justice, equity and inclusion. I would place their name on a small piece of Bristol board and add it to the wall.  The very first person I put on the wall was Ignacio Ellacuria – a Jesuit priest who worked tirelessly for peace before being assassinated in El Salvador in 1989. A tradition had begun.

Nine years and approximately 1600 names later, I will put my final pair of names up tomorrow.  Due to some renovations at the school, I am vacating the classroom at the end of this school year.  It’s time to take down the wall.

This really has been a labour of love.  The daily ritual of learning about a courageous activist who has made the world a better place has introduced me to some amazing people.  Sharing their triumphs and their struggles with my students has truly been an honour. I hope that they found these stories to be educational and inspiring.  I know that I have.

I believe that the wall embodies diversity.  It includes poets, musicians, artists, anti-racism activists, saints, refugees, teachers, children, garment workers, LGBTQI+ activists, politicians, environmentalists and athletes.  It includes toddlers and elders. It includes some people who lived a long, long time ago and people who were in the news this week. It includes people from an assortment of faith traditions.

People have asked me if it is difficult to find a new person to put up on the wall each day.  Surprisingly, it has been incredibly easy. This process has reminded me that people are essentially very, very good.

Are you recognizing peacemakers in your classroom? Let us know below! 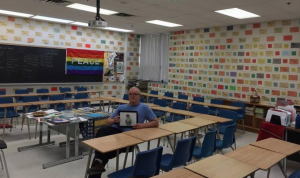 Tim O’Connor is a Religion teacher at St. Michael Catholic Secondary School.  For seven years,  he honoured somebody somewhere in the world who was promoting peace and social justice.  Due to a construction project at the school, Tim had to move from the classroom and the project came to an end last June.  Tim is a MPACS graduate from Conrad Grebel and is part of the staff team at Camp Micah – a peace and social justice leadership camp for high school students. Tim is a member of the TREE Advisory Committee.